No longer updated! You are viewing the a post of the first edition of “Writing an OS in Rust”, which is no longer updated. You can find the second edition here.

In this post, we start exploring CPU exceptions. Exceptions occur in various erroneous situations, for example when accessing an invalid memory address or when dividing by zero. To catch them, we have to set up an interrupt descriptor table that provides handler functions. At the end of this post, our kernel will be able to catch breakpoint exceptions and to resume normal execution afterwards.

As always, the complete source code is available on GitHub. Please file issues for any problems, questions, or improvement suggestions. There is also a comment section at the end of this page.

We've already seen several types of exceptions in our kernel:

For the full list of exceptions check out the OSDev wiki.

In order to catch and handle exceptions, we have to set up a so-called Interrupt Descriptor Table (IDT). In this table we can specify a handler function for each CPU exception. The hardware uses this table directly, so we need to follow a predefined format. Each entry must have the following 16-byte structure:

The options field has the following format:

When an exception occurs, the CPU roughly does the following:

Instead of creating our own IDT type, we will use the Idt struct of the x86_64 crate, which looks like this:

Calling conventions specify the details of a function call. For example, they specify where function parameters are placed (e.g. in registers or on the stack) and how results are returned. On x86_64 Linux, the following rules apply for C functions (specified in the System V ABI):

Note that Rust does not follow the C ABI (in fact, there isn't even a Rust ABI yet). So these rules apply only to functions declared as extern "C" fn.

The calling convention divides the registers in two parts: preserved and scratch registers.

On x86_64, the C calling convention specifies the following preserved and scratch registers:

The compiler knows these rules, so it generates the code accordingly. For example, most functions begin with a push rbp, which backups rbp on the stack (because it's a callee-saved register).

In contrast to function calls, exceptions can occur on any instruction. In most cases we don't even know at compile time if the generated code will cause an exception. For example, the compiler can't know if an instruction causes a stack overflow or a page fault.

For exception and interrupt handlers, however, pushing a return address would not suffice, since interrupt handlers often run in a different context (stack pointer, CPU flags, etc.). Instead, the CPU performs the following steps when an interrupt occurs:

In the x86_64 crate, the exception stack frame is represented by the ExceptionStackFrame struct. It is passed to interrupt handlers as &mut and can be used to retrieve additional information about the exception's cause. The struct contains no error code field, since only some few exceptions push an error code. These exceptions use the separate HandlerFuncWithErrCode function type, which has an additional error_code argument.

If you are interested in more details: We also have a series of posts that explains exception handling using naked functions linked at the end of this post.

Now that we've understood the theory, it's time to handle CPU exceptions in our kernel. We start by creating a new interrupts module:

In the new module, we create an init function, that creates a new Idt:

For our use case, we don't need to overwrite any instructions (it wouldn't even be possible since we set the page table flags to read-only). Instead, we just want to print a message when the breakpoint instruction is executed and then continue the program.

So let's create a simple breakpoint_handler function and add it to our IDT:

Our handler just outputs a message and pretty-prints the exception stack frame.

When we try to compile it, the following error occurs:

This error occurs because the x86-interrupt calling convention is still unstable. To use it anyway, we have to explicitly enable it by adding #![feature(abi_x86_interrupt)] on the top of our lib.rs.

In order that the CPU uses our new interrupt descriptor table, we need to load it using the lidt instruction. The Idt struct of the x86_64 provides a load method function for that. Let's try to use it:

When we try to compile it now, the following error occurs:

So the load methods expects a &'static self, that is a reference that is valid for the complete runtime of the program. The reason is that the CPU will access this table on every interrupt until we load a different IDT. So using a shorter lifetime than 'static could lead to use-after-free bugs.

In fact, this is exactly what happens here. Our idt is created on the stack, so it is only valid inside the init function. Afterwards the stack memory is reused for other functions, so the CPU would interpret random stack memory as IDT. Luckily, the Idt::load method encodes this lifetime requirement in its function definition, so that the Rust compiler is able to prevent this possible bug at compile time.

In order to fix this problem, we need to store our idt at a place where it has a 'static lifetime. To achieve this, we could either allocate our IDT on the heap using Box and then convert it to a 'static reference or we can store the IDT as a static. Let's try the latter:

There are two problems with this. First, statics are immutable, so we can't modify the breakpoint entry from our init function. Second, the Idt::new function is not a const function, so it can't be used to initialize a static. We could solve this problem by using a static mut of type Option<Idt>:

This variant compiles without errors but it's far from idiomatic. static muts are very prone to data races, so we need an unsafe block on each access. Also, we need to explicitly unwrap the IDT on each use, since might be None.

🔗Lazy Statics to the Rescue

The one-time initialization of statics with non-const functions is a common problem in Rust. Fortunately, there already exists a good solution in a crate named lazy_static. This crate provides a lazy_static! macro that defines a lazily initialized static. Instead of computing its value at compile time, the static laziliy initializes itself when it's accessed the first time. Thus, the initialization happens at runtime so that arbitrarily complex initialization code is possible.

Let's add the lazy_static crate to our project:

We need the spin_no_std feature, since we don't link the standard library. We also need the #[macro_use] attribute on the extern crate line to import the lazy_static! macro.

Now we can create our static IDT using lazy_static:

Note how this solution requires no unsafe blocks or unwrap calls.

🔗Aside: How does the lazy_static! macro work?

The macro generates a static of type Once<Idt>. The Once type is provided by the spin crate and allows deferred one-time initialization. It is implemented using an AtomicUsize for synchronization and an UnsafeCell for storing the (possibly unitialized) value. So this solution also uses unsafe behind the scenes, but it is abstracted away in a safe interface.

Now we should be able to handle breakpoint exceptions! Let's try it in our rust_main:

When we run it in QEMU now (using make run), we see the following: 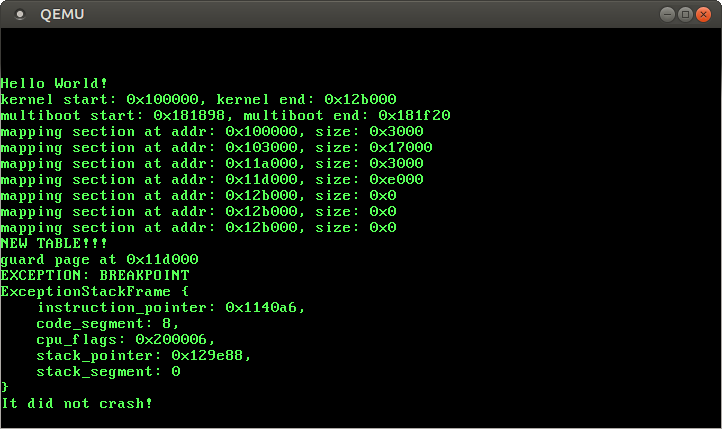 It works! The CPU successfully invokes our breakpoint handler, which prints the message, and then returns back to the rust_main function, where the It did not crash! message is printed.

Aside: If it doesn't work and a boot loop occurs, this might be caused by a kernel stack overflow. Try increasing the stack size to at least 16kB (4096 * 4 bytes) in the boot.asm file.

We see that the exception stack frame tells us the instruction and stack pointers at the time when the exception occurred. This information is very useful when debugging unexpected exceptions. For example, we can look at the corresponding assembly line using objdump:

The -d flags disassembles the code section and -C flag makes function names more readable by demangling them. The -B flag of grep specifies the number of preceding lines that should be shown (5 in our case).

We clearly see the int3 exception that caused the breakpoint exception at address 1140a5. Wait… the stored instruction pointer was 1140a6, which is a normal add operation. What's happening here?

In some cases, the distinction between faults and traps is vague. For example, the debug exception behaves like a fault in some cases, but like a trap in others. So to find out the meaning of the saved instruction pointer, it is a good idea to read the official documentation for the exception, which can be found in the AMD64 manual in Section 8.2. For example, for the breakpoint exception it says:

#BP is a trap-type exception. The saved instruction pointer points to the byte after the INT3 instruction.

The documentation of the Idt struct and the OSDev Wiki also contain this information.

We've successfully caught our first exception and returned from it! The next step is to add handlers for other common exceptions such as page faults. We also need to make sure that we never cause a triple fault, since it causes a complete system reset. The next post explains how we can avoid this by correctly catching double faults.

There are valid use cases for restarting an instruction that caused a breakpoint. The most common use case is a debugger: When setting a breakpoint on some code line, the debugger overwrites the corresponding instruction with an int3 instruction, so that the CPU traps when that line is executed. When the user continues execution, the debugger swaps in the original instruction and continues the program from the replaced instruction.

Thanks. That solved it.

Thanks! Should be fixed now.