CPU exceptions occur in various erroneous situations, for example when accessing an invalid memory address or when dividing by zero. To react to them we have to set up an interrupt descriptor table that provides handler functions. At the end of this post, our kernel will be able to catch breakpoint exceptions and to resume normal execution afterwards.

This blog is openly developed on GitHub. If you have any problems or questions, please open an issue there. You can also leave comments at the bottom. The complete source code for this post can be found in the post-05 branch.

On x86 there are about 20 different CPU exception types. The most important are:

For the full list of exceptions check out the OSDev wiki.

In order to catch and handle exceptions, we have to set up a so-called Interrupt Descriptor Table (IDT). In this table we can specify a handler function for each CPU exception. The hardware uses this table directly, so we need to follow a predefined format. Each entry must have the following 16-byte structure:

The options field has the following format:

When an exception occurs, the CPU roughly does the following:

Don't worry about steps 4 and 5 for now, we will learn about the global descriptor table and hardware interrupts in future posts.

Instead of creating our own IDT type, we will use the InterruptDescriptorTable struct of the x86_64 crate, which looks like this:

Calling conventions specify the details of a function call. For example, they specify where function parameters are placed (e.g. in registers or on the stack) and how results are returned. On x86_64 Linux, the following rules apply for C functions (specified in the System V ABI):

Note that Rust does not follow the C ABI (in fact, there isn't even a Rust ABI yet), so these rules apply only to functions declared as extern "C" fn.

The calling convention divides the registers in two parts: preserved and scratch registers.

On x86_64, the C calling convention specifies the following preserved and scratch registers:

The compiler knows these rules, so it generates the code accordingly. For example, most functions begin with a push rbp, which backups rbp on the stack (because it's a callee-saved register).

In contrast to function calls, exceptions can occur on any instruction. In most cases we don't even know at compile time if the generated code will cause an exception. For example, the compiler can't know if an instruction causes a stack overflow or a page fault.

Note that this does not mean that all registers are saved to the stack at function entry. Instead, the compiler only backs up the registers that are overwritten by the function. This way, very efficient code can be generated for short functions that only use a few registers.

For exception and interrupt handlers, however, pushing a return address would not suffice, since interrupt handlers often run in a different context (stack pointer, CPU flags, etc.). Instead, the CPU performs the following steps when an interrupt occurs:

In the x86_64 crate, the interrupt stack frame is represented by the InterruptStackFrame struct. It is passed to interrupt handlers as &mut and can be used to retrieve additional information about the exception's cause. The struct contains no error code field, since only some few exceptions push an error code. These exceptions use the separate HandlerFuncWithErrCode function type, which has an additional error_code argument.

If you are interested in more details: We also have a series of posts that explains exception handling using naked functions linked at the end of this post.

Now that we've understood the theory, it's time to handle CPU exceptions in our kernel. We'll start by creating a new interrupts module in src/interrupts.rs, that first creates an init_idt function that creates a new InterruptDescriptorTable:

For our use case, we don't need to overwrite any instructions. Instead, we just want to print a message when the breakpoint instruction is executed and then continue the program. So let's create a simple breakpoint_handler function and add it to our IDT:

Our handler just outputs a message and pretty-prints the interrupt stack frame.

When we try to compile it, the following error occurs:

This error occurs because the x86-interrupt calling convention is still unstable. To use it anyway, we have to explicitly enable it by adding #![feature(abi_x86_interrupt)] on the top of our lib.rs.

In order that the CPU uses our new interrupt descriptor table, we need to load it using the lidt instruction. The InterruptDescriptorTable struct of the x86_64 provides a load method function for that. Let's try to use it:

When we try to compile it now, the following error occurs:

So the load methods expects a &'static self, that is a reference that is valid for the complete runtime of the program. The reason is that the CPU will access this table on every interrupt until we load a different IDT. So using a shorter lifetime than 'static could lead to use-after-free bugs.

In fact, this is exactly what happens here. Our idt is created on the stack, so it is only valid inside the init function. Afterwards the stack memory is reused for other functions, so the CPU would interpret random stack memory as IDT. Luckily, the InterruptDescriptorTable::load method encodes this lifetime requirement in its function definition, so that the Rust compiler is able to prevent this possible bug at compile time.

In order to fix this problem, we need to store our idt at a place where it has a 'static lifetime. To achieve this we could allocate our IDT on the heap using Box and then convert it to a 'static reference, but we are writing an OS kernel and thus don't have a heap (yet).

As an alternative we could try to store the IDT as a static:

However, there is a problem: Statics are immutable, so we can't modify the breakpoint entry from our init function. We could solve this problem by using a static mut:

This variant compiles without errors but it's far from idiomatic. static muts are very prone to data races, so we need an unsafe block on each access.

🔗Lazy Statics to the Rescue

Fortunately the lazy_static macro exists. Instead of evaluating a static at compile time, the macro performs the initialization when the static is referenced the first time. Thus, we can do almost everything in the initialization block and are even able to read runtime values.

We already imported the lazy_static crate when we created an abstraction for the VGA text buffer. So we can directly use the lazy_static! macro to create our static IDT:

Note how this solution requires no unsafe blocks. The lazy_static! macro does use unsafe behind the scenes, but it is abstracted away in a safe interface.

The last step for making exceptions work in our kernel is to call the init_idt function from our main.rs. Instead of calling it directly, we introduce a general init function in our lib.rs:

With this function we now have a central place for initialization routines that can be shared between the different _start functions in our main.rs, lib.rs, and integration tests.

Now we can update the _start function of our main.rs to call init and then trigger a breakpoint exception:

When we run it in QEMU now (using cargo run), we see the following: 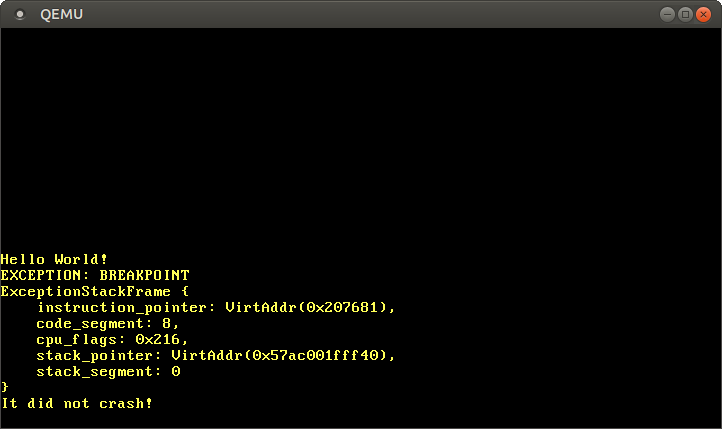 It works! The CPU successfully invokes our breakpoint handler, which prints the message, and then returns back to the _start function, where the It did not crash! message is printed.

We see that the interrupt stack frame tells us the instruction and stack pointers at the time when the exception occurred. This information is very useful when debugging unexpected exceptions.

Let's create a test that ensures that the above continues to work. First, we update the _start function to also call init:

Remember, this _start function is used when running cargo test --lib, since Rust's tests the lib.rs completely independent of the main.rs. We need to call init here to set up an IDT before running the tests.

Now we can create a test_breakpoint_exception test:

The test invokes the int3 function to trigger a breakpoint exception. By checking that the execution continues afterwards, we verify that our breakpoint handler is working correctly.

You can try this new test by running cargo test (all tests) or cargo test --lib (only tests of lib.rs and its modules). You should see the following in the output:

We've successfully caught our first exception and returned from it! The next step is to ensure that we catch all exceptions, because an uncaught exception causes a fatal triple fault, which leads to a system reset. The next post explains how we can avoid this by correctly catching double faults.

Creating and maintaining this blog and the associated libraries is a lot of work, but I really enjoy doing it. By supporting me, you allow me to invest more time in new content, new features, and continuous maintenance.

The best way to support me is to sponsor me on GitHub, since they don't charge any fees. If you prefer other platforms, I also have Patreon and Donorbox accounts. The latter is the most flexible as it supports multiple currencies and one-time contributions.

Instead of authenticating the giscus application, you can also comment directly on the on GitHub. Just click the "X comments" link at the top — or the date of any comment — to go to the GitHub discussion.

If you want to work with me, reach out on LinkedIn or write me at job@phil-opp.com.